On Sunday May 12, 2019 at 12:31am Clovis Police responded to a call for service from a resident in the area of Ashlan and Fowler. The resident reported that a naked man had forced open a window and entered a room in the house where two female juveniles, both 10 years old, were sleeping. The juveniles awoke to the man touching them inappropriately and fought him off. The man fled through the window. The juveniles alerted adults in the home who contacted 911.

Clovis Police Officers responded and were assisted from above by the California Highway Patrol airplane. Several witnesses were questioned. Following an investigation, on May 15th Officers arrested 26-year-old Timothy Jay Picard of Fresno. Picard has multiple prior arrests which include stalking and burglary. He is also on AB109 Probation for stalking. 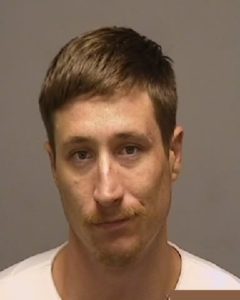 Clovis Police are working with the Fresno District Attorney’s office on this case. Picard faces charges of lewd and lascivious acts with a minor under 14, first degree burglary, and violating his probation.

The Clovis Police Department would like to commend the two juveniles for their bravery and quick action in fighting off the attacker and for the assistance of the CHP’s airplane in helping with this arrest.