Welcome to the Office of the City Clerk 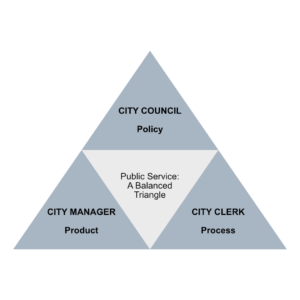 The City Clerk is the local official who administers democratic processes such as elections, access to city records, and all legislative actions ensuring transparency to the public. The City Clerk acts as a compliance officer for federal, state, and local statutes including the Political Reform Act, the Brown Act, and the Public Records Act. The City Clerk also manages public inquiries and relationships and arranges for ceremonial and official functions.

It is the mission of the Office of the City Clerk to provide quality customer service and equal access to open and transparent government. The City Clerk performs various professional and managerial duties according to Statute and the Municipal Code, including the Political Reform Act, the Brown Act, and the Public Records Act. The City Clerk also responds to requests of citizens and the needs of various city departments. Primary duties include the following major categories:

Legislative Administration – The City Clerk facilitates the execution of official and legislative processes. This includes administering provisions of the Political Reform Act of 1974, attesting to the passing of resolutions and ordinances, and participating in all City Council meetings.

Records Management – The City Clerk’s Office records official actions and legislation of the municipal government, documenting the proceedings of meetings and retaining other legal and historical records. Records are maintained while providing appropriate public access to government business.

The City Clerk manages the proper maintenance and disposition of City records and information according to statute, and helps to preserve City history.