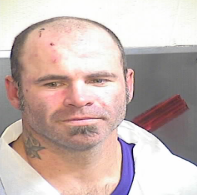 A robbery suspect is in custody this morning after he beat an elderly male and stole his cell phone in front of a store near Herndon/Clovis. 911 calls began coming into our communications center just after 8 AM regarding an elderly male lying on the sidewalk, appearing to be injured. Officers, Clovis Fire, and EMS responded immediately to find the victim with a head injury. A store employee witnessed the assault and was able to provide a suspect description. Officers searched the area and located the suspect with the victim’s cell phone, and he was taken into custody without incident. At this time, it does not appear that the suspect used a weapon.

The 78-year-old victim was transported to the hospital with major injuries where he remains in critical condition. The suspect has been identified as 37-year-old Joseph Wright of Fresno County. Wright is facing felony charges in relation to the robbery and battery of the victim this morning.

We would like to thank the witnesses who called 911 immediately which allowed our officers to respond and arrest the suspect nearby and tend to the victim.