Recently appointed City Manager John Holt and retiring City Manager Luke Serpa have announced the appointment of Andrew Haussler as the new Assistant City Manager, to become effective January 1, 2022 upon confirmation by the City Council. Andrew has served the City for 15 years in a variety of capacities including Community Development Grants Coordinator, Housing Program Manager, Deputy City Manager and most recently the Community & Economic Development Director since 2016. 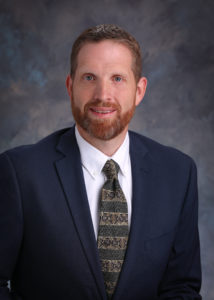 Andrew started his career with the global electricity generation leader, AES Corporation, where he marketed and managed electricity contracts in Long Beach.  Seeking a return to the Valley, he was hired as a staff analyst for Fresno County where he was exposed to the field of community development and began working on projects related to affordable housing finance, neighborhood revitalization and economic development.  Andrew was hired in 2006 by the City of Clovis to manage community development grants, was promoted to Housing Program Manager in 2009 and then promoted to Deputy City Manager in early 2015.  In 2016 he was appointed to be the Community & Economic Development Director where he led the City to a robust economic expansion with thousands of jobs being created and the City’s economy diversifying to be more resilient.  The City’s economic performance during the pandemic and care for businesses during the difficult time leaned heavily on the work the City’s economic development team Andrew had built during his tenure.

Andrew is very active in the community; he has served on numerous boards and non-profits in the past and currently serves on the Economic Development Corporation of Fresno County Executive Board as the vice-chair, is on the board of the California Association for Economic Development, and is on the executive committee for the Fresno–Madera Continuum of Care.

“Andrew brings fresh ideas, a unique perspective, a collaborative attitude, and a passion for Clovis to the position.  He upholds Clovis’ goals to be an excellent place for our citizens to succeed and to improve the quality of life in our community,” Holt noted.

The Clovis City Council is expected to confirm Andrew’s appointment to this new position during the scheduled December 13th Council Meeting.