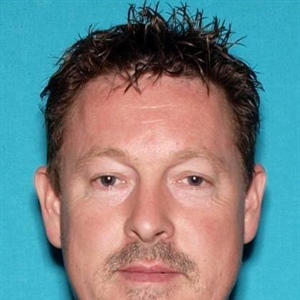 Clovis Police are actively searching for Dave Thomas McCann in connection with a double homicide that occurred this morning in Clovis.

Shortly before 4:00 a.m. this morning, Clovis police were called to the 700 block of W. Omaha on a report of a stabbing.  Two victims were found deceased in the home.  A witness identified Dave McCann as the suspect, and McCann was known to the victims and witness.

McCann is described as a 47 year old white male, 6’2”, 220 pounds, with brown hair and blue eyes.  He may be driving a 16 foot white Penske moving truck bearing Indiana license plate 2504522.  The truck is similar to the one depicted in the attached photo.  McCann is considered dangerous.  Police ask that anyone with information regarding the whereabouts of McCann to call the Clovis Police Department at 324-2800.

This investigation is still developing and no further information is available at this time.  The identities of the victims will not be released at this time.

UPDATE  5/8/16 @ 12:07 AM- We can confirm that the Penske rental truck has been located near the California central coast. We continue to follow up on leads. Call law enforcement if you see McCann and do not approach him. We will continue to update this post.

UPDATE 5/8/16- 1:35 PM – Detectives responded to Paso Robles, California last night and confirmed that the suspect abandoned the white Penske rental truck. At this time, the suspect is still outstanding, and Detectives are following up on leads. It is possible that the suspect is still in the Paso Robles area riding a bicycle. The bicycle is described as a grey/tan 15-speed mountain bicycle, with disc brakes, and a small tool kit under the seat. If you see the suspect, call 911 immediately and do not approach him as he is dangerous. If you have additional tips on the suspect’s possible whereabouts, please call the Clovis Police Department at (559) 324-2800. We will continue to update this post as soon as information is available.

‎UPDATE‬ – 5/8/16 – 4:22 PM – The Fresno County Coroner’s office reports that the victims are 68-year-old Judith Cooper of Paso Robles and Tierney Cooper-McCann, 36, of Fresno.

UPDATE – 5/10/16 – 8:37 AM – Detectives on the California central coast are reporting several potential sightings of suspect Dave McCann in the Cambria area as recent as Monday, May 9. These reports came in overnight and officers are in the area searching. It’s been reported that McCann is on foot now. McCann is described as a 49 year-old white male adult, medium build, tall, with a strong British accent. We are continuing to ask the public to look for this dangerous double homicide suspect. If you see McCann, call 911 and do not approach him.

The Clovis Police Department encourages everyone to celebrate Halloween responsibly