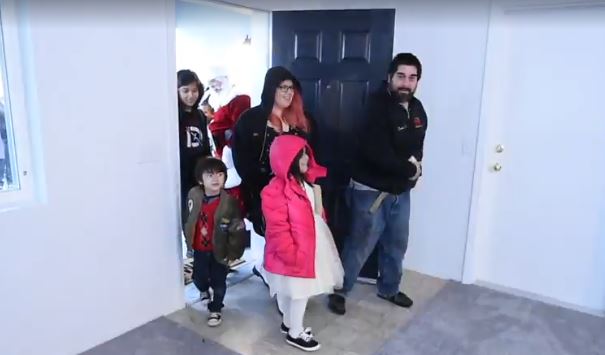 The following article was posted to FresnoBee.com on December 23, 2019, by Ashleigh Panoo.

The rain didn’t dampen the Loza and Johnson families’ excitement Monday as they stood outside their new homes in Clovis, waiting to step inside just in time for Christmas.

Over the past months, the two families have worked beside each other and with Habitat for Humanity volunteers, putting in at least 500 hours of work building the two houses that sit next to each other on 4th Street at Sunnyside Avenue.

Santa and Mrs. Claus, along with family, friends and Mayor Bob Whalen, were in attendance Monday as the families received the keys to their 1,400-square-foot, three-bedroom, two-bathroom homes.

Although the homes are modest, the families say they are a big turnaround from where they have been living.

Nelida and Daniel Loza, and their children Daniel, 5, Adelin, 7, Vieney, 16, and Yessica, 18, were in an apartment, which was “pretty spacious, but we had some problems with the integrity of the home,” Nelida said. “There were holes in the floor, it was really inadequate. It was stuff that wasn’t getting taken care of.”

She and her husband Stephen Johnson and their children Iyah, 2, DJ, 9, and Jahsay, 13, stood in the kitchen and said a prayer with the community before touring their new home.

Both the Johnsons and the Lozas have an affordable monthly mortgage payment thanks to Noble Credit Union and Habitat For Humanity’s Affordable Homeownership Program.

Noble Credit Union pledged Monday to invest $2.5 million over the next 18 months to the program, which will give Habitat families a loan below market rate. Also, Noble will partner with the Federal Home Loan Bank of San Francisco to give families $15,000 in down payment assistance.

As always, the chosen families will still have to put in sweat equity and prove they can afford homeownership.

Both the Johnsons and Lozas said they are eager to move in and spend their first Christmas in their new home.

Community businesses stepped up to gift the families with yard tools, coffee, ornaments and more. To make moving in easier, Grocery Outlet stocked each kitchen with a dozen bags of groceries.

Nelida Loza said she was proud of the work she put in to have her family in a house they can call their own.

“It feels good knowing all the love and attention that went into the house,” she said. “We know that everything was built with love and integrity and everyone did the best they could on it.”

The article can be viewed at the Fresno Bee at https://www.fresnobee.com/news/local/article238551438.html