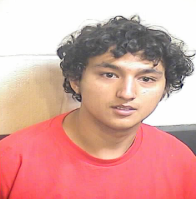 This morning just before 10:30 AM, officers responded to a home near Herndon and Sunnyside regarding a kidnapping that had just occurred. A family member of the victim called 911 reporting to our dispatchers that their adult daughter’s boyfriend had just forced his way into the home and took her.

Officers arrived within minutes and Detectives also responded to the scene. Their investigation determined that the adult suspect and victim had been going through a break-up. The couple has 2 children under the age of 2, and the victim had been staying with her family. The suspect broke into their home forcing the victim into his car against her will. Officers and Detectives located them in the suspect’s neighborhood in Fresno in less than an hour. The suspect was taken into custody without incident and the victim was found safe, with no injuries.

The suspect has been identified as 22-year-old David Seip of Fresno. He is in custody, facing several felony charges such as kidnapping, false imprisonment, and domestic violence. The victim has been reunited her children and family.

If you or someone, you know is the victim of domestic violence or any dangerous relationship, law enforcement and the Marjaree Mason Center (MMC) in Fresno are here 24 hours a day. Call 911 for emergencies or (559) 324-2800 for non-emergencies in Clovis. Confidential assistance is also available through MMC at (559) 233-HELP.

Clovis Police Department Focuses on the Dangers of Distracted Driving