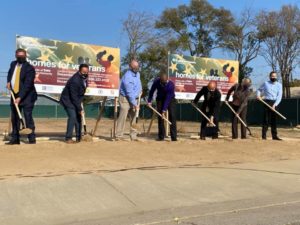 The groundbreaking also has special meaning for Councilmember Jose Flores whose childhood home once stood where the two homes for local veterans will be built.

The process is underway to select military veterans or spouses of veterans for ownership of these new homes.

The construction of these two homes, marks Habitat for Humanity Greater Fresno Area’s 25th and 26th home in the City since 1985.