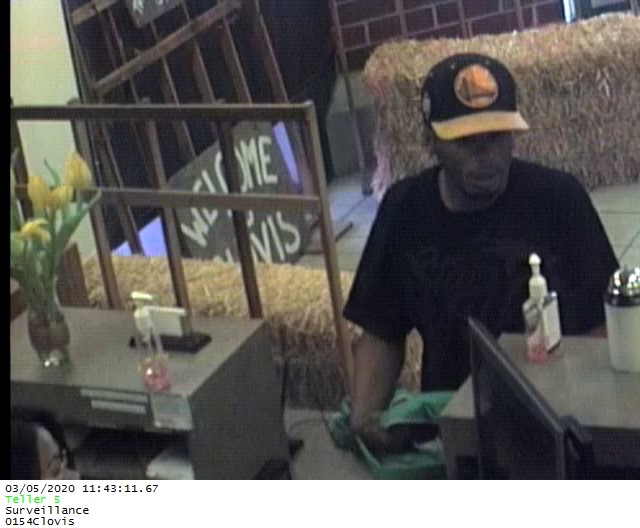 Screen shot of robbery suspect in the bank.

On Thursday March 5 at 11:44 a.m., Clovis Police Dispatchers received a robbery-in-progress call at Union Bank located at 840 Herndon Avenue in Clovis.  The suspect passed a demand note to the teller.  No weapon was seen and there were no injuries.  Prior to officers arriving, bank staff told dispatch the suspect, a black male adult, ran southbound from the location.  Clovis Police Officers arrived quickly, however, the suspect could not be located.  The suspect got away with an undisclosed amount of money.

Clovis Police Detectives and the Federal Bureau of Investigation responded and continued the investigation.  Using video from inside the bank and various other locations within the city, Detectives were able to identify a suspect and a vehicle used to flee the crime scene.  They also determined a second suspect was involved and acted as the driver of the vehicle.

With help from the Visalia Police Department, detectives were able to identify both robbery suspects.  29-year-old Jacoby Jackson and 31-year-old Collins Keanche of Visalia were arrested yesterday in Visalia.  Both were transported back to Fresno County and booked into the Fresno County Jail.  Both men were booked on robbery, burglary, conspiracy and probation violation charges.

No Cost COVID-19 Testing in Clovis