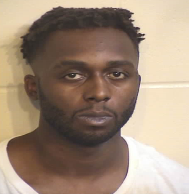 Clovis Police received a report of a robbery and stabbing at Clovis Recycling in the 700 block of Jefferson Ave on May 22, 2019, just after 12:20PM. Officers arrived on scene shortly after the 911 calls to find an adult male who had been stabbed twice, however the suspect had already fled in a vehicle. The victim was transported to the hospital with major injuries while officers and detectives began their investigation and canvassed the area.

On May 24, 2019, the investigation led Detectives to the area of Blackstone Ave/Alluvial Ave in Fresno where they arrested 25 year-old Davonte Tennie of Louisiana. At the time of Tennie’s arrest, he had concealed a loaded firearm on his person, and was in a stolen vehicle. After fighting with police, Tennie was taken into custody and booked into Fresno County Jail where he still remains. His charges include robbery, assault with a deadly weapon, battery on a peace officer, possession of a stolen vehicle, and carrying a loaded concealed firearm.