A vehicle traveling southbound on Willow just north of Shaw was fired upon by the driver of another vehicle who had a gun last night. Minutes before that, the drivers of both vehicles who are known to each other were in an argument outside of an apartment in northeast Fresno. When both drivers left in their own vehicles, the suspect followed the victim into Clovis as they turned onto Willow from Barstow. Before making it to Shaw, the suspect shot at the victim’s car, hitting it four times on the passenger side. Thankfully, no one was shot or injured during this incident.

Clovis Police Dispatch received a 911 call at 8:36PMregarding the shooting, and officers responded immediately. Once it was discovered that the shooting occurred on the southbound side of Willow, that section of the roadway was closed for our investigation while additional officers worked on locating the suspect and communicating with the victim. Detectives were called to the scene and worked with officers to locate and arrest the suspect in Fresno just before midnight.

The suspect has been identified as 26-year-old Ernest Allen of Fresno. Allen was booked into Fresno County Jail where he remains at this time for assault with a deadly weapon and shooting into an occupied vehicle.

Due to California’s AB1475, a booking photo of the suspect will not be posted. 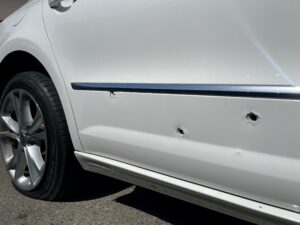