On Thursday, March 17 just before 11:30 A.M., our communications center received a call for service at the Mountain View shopping center at Shaw Ave./Fowler Ave. The caller stated that they had just been shot at by a pellet or similar object from a vehicle driving through the parking lot. The victim also stated that before he was struck, he heard the driver of that vehicle yell a racially motivated slur. The caller told our dispatcher that they were not injured and provided a description of the suspect and his vehicle. Officers responded immediately, and quickly located the vehicle driving recklessly in the area of Ashlan Ave./Armstrong Ave. As the vehicle was pulled over, two male passengers ran from the area. Officers were able to detain the driver and another passenger without further incident. Upon searching the vehicle, Officers located a plastic painted “gel blaster”. These are toy guns that shoot superabsorbent polymer water beads (gel balls).

Additional Officers responded to the parking lot where the incident occurred. While speaking with the victim, a Hispanic male adult, he confirmed he was stuck in the face and shoulder area, however, was not injured. Following their investigation, Officers arrested 18-year-old Jordon Aubuchon of Clovis for one felony count of a hate crime, and one misdemeanor count of negligently discharging a BB device. Aubuchon is a white male.

Clovis Police Chief Curt Fleming stated, “hate crimes have no place in Clovis, will not be tolerated, and will be dealt with swiftly.” Additionally, our Officers have noticed an increase of incidents involving juveniles and young adults shooting “gel blasters” and other similar toy guns. The Clovis Police Department would like to take this opportunity to remind everyone that shooting any projectile, especially from a moving vehicle, is dangerous and against the law. 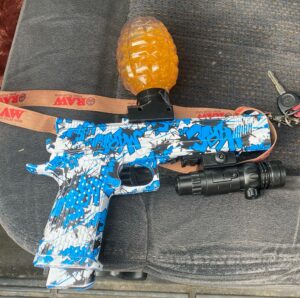 Clovis Night Out to take place on Saturday, September 28

Resources for Businesses and Residents Impacted by COVID-19