We appreciate the Grand Jury for recognizing the significant and ongoing efforts by the Clovis Police Department to build an ethnically diverse organization which is reflective of the Clovis Community. We agree with the summary of their report where they state:

“The Grand Jury’s investigation over more than a year concluded the Clovis Police Department has made significant efforts to ethnically diversify the department to include African American and other sworn officers of color. However, to date the results have not met their expectations.”

The results have not met our expectations, because our expectations are high. But important strides are being made. Over the past two years, 23% of Police Officers hired by the Clovis Police Department are Female, 36% are Hispanic, 9% are Indian, and 5% are Asian. As stated in the Grand Jury’s own report, we “seek to hire the most-diverse, well trained, professional police officers and staff”.

In 2019, two years prior to the Grand Jury’s investigation, we self-identified the importance of recruiting and retaining officers from diverse ethnic backgrounds and formed a Citizens Diversity Committee to assist us with our goals. The recommendations from that Committee have helped us shape our recruitment efforts for nearly three years. You can find our recruitment team connecting with candidates from ethnically diverse backgrounds monthly at police academies, colleges, and community events, including at the Fresno Juneteenth Festival, where we were the only participating law enforcement agency.

This is a challenging time for police departments all across the nation as fewer candidates overall are applying to become officers. We welcome individuals from all backgrounds to apply at the Clovis Police Department, where you will find a culture which is inclusive and professional. You will be well trained and well compensated. Positions for sworn and non-sworn positions are updated regularly on our recruitment website JoinClovisPD.com. We look forward to meeting you.

Here is the complete report by the Fresno County Grand Jury:

Summary
The 2021-2022 Fresno County Civil Grand Jury received a citizen complaint requesting the review of the Clovis Police Department and its ethnic diversity to include African American sworn officers within the department. It is the responsibility of the Grand Jury to assure local governments act in the best interest of the citizens they represent.

The Grand Jury’s investigation over more than a year concluded the Clovis Police Department has made significant efforts to ethnically diversify the department to include African American and other sworn officers of color. However, to date the results have not met their expectations.

Background
In late 2020, the Fresno County Civil Grand Jury received a citizen complaint requesting a review of the Clovis Police Department’s hiring and staffing practices as they relate to ethnic diversity. The complaint suggested the possibility of systemic racism because there was one African American officer on the force in 1990 and only one in 2020. Further, the complaint alleged, other law enforcement agencies throughout Fresno County, hiring from the same officer-candidate pool, have had greater success in hiring African American officers than Clovis despite CPD’s historical superior compensation package.

Fresno has experienced slower growth and has a very different demographic. Incorporated in 1885, Fresno is a city in California’s San Joaquin Valley. Fresno is the fifth largest city by population and the sixth largest city by area in California having an area of 116 square miles. It is the largest municipality and serves as county seat to Fresno County. By comparison, Clovis was incorporated in 1912. It is in Fresno County, at the foot of the Sierra Nevada mountain range. Clovis covers 25.91 square miles and abuts the City of Fresno on the Northeastern edge. 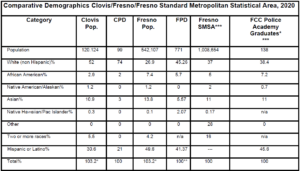 The Grand Jury also reviewed census data, relevant hiring information and other material about the Clovis and Fresno communities as well as the state’s Peace Officers Standards and Training (POST) guidelines.

The Grand Jury was told that the City of Clovis and CPD leadership acknowledge the need to continue to do more to address diversity. The majority were not aware of any objectives to increase the diversity among sworn officers. However, a few interviewees indicated increasing diversity would be beneficial to CPD. None of the interviewees indicated there were any incidents of disrespect or discrimination for people of color within the CPD, although, they did indicate they experience such in the Clovis community.

Many interviewees said there is a perception that the CPD does not welcome candidates of color, especially African Americans. This perception has had significant impact, as such candidates typically were not enticed to apply for the higher compensation previously offered by the CPD. Recently CPD hired 10 sworn police officers, none of which are African American.

The CPD has primarily focused on the early development of candidates and young people who may aspire to be a police officer in the Clovis community. The Grand Jury found minimal information regarding the CPD recruiting African American lateral transfer officers or cadets from police academies outside California’s Central Valley. This has limited their opportunity to recruit more African American candidates.

The CPD leadership established a Citizens Diversity Committee in 2019. The stated goals of the Committee are to:

• Engage a diverse group of community leaders to generate strategies and ideas that will increase the number of applicants who represent a wide range of cultures, ethnicities, and who have a wide range of skills.
• Meet 2 to 3 times per year with subgroups meeting and communicating as needed. 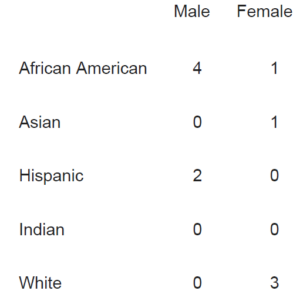 In 2018, CPD leadership went on to formulate a Diversity Strategic Plan, which was developed as a means to insure the CPD hire the most-diverse, well-trained, professional police officers and staff. This Plan and its administrators are also charged with developing and implementing a methodology to continually monitor the state of diversity within the department as it relates to ethnic/racial and gender make-up. The Plan attempts to engage every employee in the CPD to understand that providing exceptional services to the citizens of Clovis will only occur with a diverse, highly qualified police department.

The CPD provided the Grand Jury with the following Strategic Objectives (Goals) of the Diversity Strategic Plan:

1. CPD adopted the following goals to improve diversity: Facilitate multiple discussions with the Command Staff to fully develop the Diversity Strategic plan and ultimately gain consensus as to the importance and viability of the plan prior to implementation.

3. Identify and request participation from a diversified group of citizens to attend a number of meetings throughout the year to provide input about the Diversity Strategic Plan and other ideas about how to get employment information to people from all racial/ethnic populations and women.

4. Communicate the Vision of this Strategic Plan to Sergeants, Corporals, Police Officers and Professional Staff within the department.

5. The Police Command Staff will identify and recruit at least three officers that represent different ethnic/racial groups to participate in the recruitment and hiring of new staff.

7. The Police Command Staff will identify at least four new methods to advertise employment opportunities to people from various ethnic/racial groups and women.

8. Review the progress toward achieving the established goals annually.

9. The Clovis Police Department will demonstrate an increase of 25% in the number of applicants who are from racial/ethnic groups and women.

The CPD has stated they have achieved 1, 3, 4, 5, and 7 of the above listed objectives and goals. For numbers 2, 6, 8, and 9, CPD is committed to continually analyze their efforts to achieve these goals.

The CPD follows the guidelines of POST regarding implicit bias. Such training is designed to help leadership in the CPD build on the culture of value of diversity. The Grand Jury was told that the CPD trains its officers in “Principled Policing” which is required training by POST at least once every five years per California Penal Code section 13519.4. The last time CPD officers were trained on this topic was in June and July of 2020 and 2017 prior to that.

The Grand Jury was told a substantial challenge exists for the CPD in hiring more officers of color, especially African Americans, as the perception is CPD does not welcome them. The interviewees indicated the CPD did not seek outside professional advice on how to develop a strategy and plan to overcome this hurdle.

F1 There is a perception among police officer candidates of color that the CPD would not be a welcoming department for them.

F2 The demographics for diversity among police officers in the CPD is nearly reflective of the Clovis community, however, much less diverse than its larger community as stated in the Fresno SMSA.

F3 There is presently no evidence or reports of explicit discrimination or disrespectful treatment of police officers of color at CPD.

F4 CPD purports to hire candidates at a higher standard than other agencies.

F5 Until recently compensation packages for CPD new hire officers were higher than other agencies.

F6 The CPD is implementing programs to make it more diverse (examples include the Citizens Diversity Committee and their Strategic Plan).

F7 The CPD follows POST standards for the training of officers in issues regarding implicit bias.

F9 The CPD command staff established a diversity strategic plan in January 2018, which has been partially completed to date.

F10 The CPD does not publicly share information on their diversity efforts.

Based on its findings, the 2021-2022 Fresno Civil Grand Jury recommends:

R1 The CPD should commit to a 1, 3, and 5 year incremental plan to reach the level of diversity that resembles the demographics of the Fresno metropolitan area, no later than March 31, 2023. (F2, F6, F9)

R2 The CPD should identify diversity-value training tools and require it biennially (every other year) for leaders in the Clovis Police Department no later than March 31, 2023. (F2, F6, F9)

R3 The CPD should expand their reach for recruiting purposes no later than March 31, 2023. This would encourage recruiting cadets from areas with a higher percentage of persons of color and African Americans in particular. Lateral transfers can be encouraged from those same areas such as Los Angeles, East Bay (Oakland) and San Francisco, for example. (F4, F6, F9)

R4 The CPD leadership should develop and implement a marketing/recruiting plan to overcome the perception that the Clovis Police Department does not welcome police officer candidates of color no later than March 31, 2023. (F1, F2, F6, F9)

R5 The CPD should seek outside professional advice on developing a strategy and plan to overcome the perception that the CPD does not welcome officers of color, including African Americans no later than March 31, 2023. (F6)

R6 The CPD should make their Diversity Strategic Plan available to the public via CPD website and within the City of Clovis’ mobile application by March 31, 2023. (F10)

Pursuant to California Penal Code Section 933.05, the 2021-2022 Fresno County Civil Grand Jury requests responses to each of the specific findings and recommendations. It is required that responses from elected County officers or agency heads are due within 60 days of the receipt of this report and 90 days from a governing body of a public agency.

Two Suspects Arrested with Thousands of Pieces of Stolen Mail