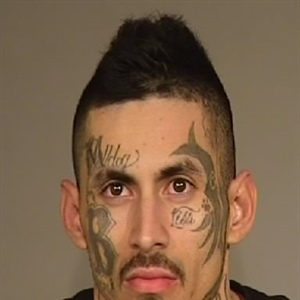 Two Fresno men, one armed with a stolen handgun and wearing a “bullet proof vest”, and a woman were arrested tonight in a stolen Mustang.

Just after 1:00 am Saturday morning, a Clovis patrol officer observed a Mustang convertible at Minnewawa and Shaw.  A check on the vehicle revealed that is was reported stolen out of Fresno on Thursday.  When officers attempted to stop the vehicle, which was also occupied by a male and female passenger, the driver failed to yield and fled. Clovis officers pursued the vehicle into Fresno and onto Freeway 41.  The pursuit ended after approximately 11 minutes at Avenue 12 justeast of 41 when the driver attempted to make a U-turn over a raised curb and high centered the vehicle.  All occupants surrendered without incident at that point.

The driver, 26 year old Isaac Zepeda who is on PRCS parole, was wearing Kevlar soft body armor and carrying a loaded handgun in his waistband.  The handgun had been reported stolen to Kingsburg PD in 2012.  Two other occupants, 36 year old Victor Mata and 37 year old Julie Bascue were also arrested.    Clovis officers located a bag along the pursuit route containing handgun ammunition and identification belonging to Mata.  Officers believe a second handgun was thrown from the vehicle during the pursuit and are still attempting to locate it.