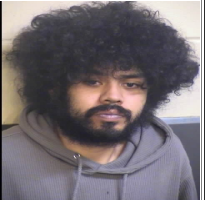 Clovis Police Officers arrived quickly and immediately located someone on the side of the home attempting to pry a door open. When the officers contacted him, he was using a 10-inch hunting knife to help pry the door. Clovis Police Officers quickly detained the suspect. He was identified as 24-year-old Fresno resident David Hernandez. He was taken into custody without incident and was later booked into the Fresno County Jail on burglary charges.

Hernandez had no prior affiliation with the victim residence. Our investigation revealed he was in the area visiting a friend. While hot prowl burglaries are not common in Clovis, they do rarely occur. We encourage all Clovis residents to lock your doors at night, set an alarm if possible, and call 911 if you see or hear anything suspicious.