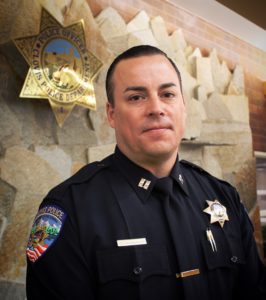 Clovis City Manager Luke Serpa has announced the appointment of Captain Curt Fleming as the new Police Chief following the retirement of Chief Matt Basgall, to become effective August 3, 2019 upon confirmation of the City Council.  Captain Fleming has served the community as a member of the Clovis Police Department for 13 years, taking on an increasingly greater amount of responsibility as he has risen through the ranks. He succeeds Matt Basgall who served as Chief for the last five years. Captain Fleming is a native of Fresno and graduated from Bullard High School.

Captain Fleming is a graduate of California State University, Fresno where he earned his Bachelor of Science in Criminology and Master of Science in Criminology.  In 2018, after 18 months of studies, he graduated from POST Command College with enhanced skills for managing the future, preparing for emerging issues in the industry, anticipating future trends, and forward-strategic thinking.

Captain Fleming is very active in the community, including serving on the Cal-ID RAN Board, Cal Chiefs Technology Committee, as member of the International Association of Chiefs of Police, and the California Police Chiefs Association.

In announcing Captain Flemings appointment, Luke Serpa said, “Captain Fleming is a natural leader and an innovative professional with a clear understanding of emerging law enforcement issues. I am confident in his ability to lead the men and women of the Clovis Police Department in their mission to provide superior protection and service to our community”.

Captain Fleming will manage a department of more than 200 staff members and an annual operating budget of nearly $40 million dollars for the 2019-2020 fiscal year.