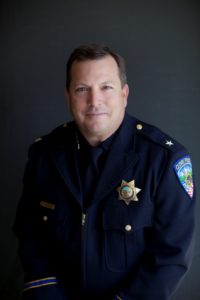 CLOVIS, CA—Clovis Chief of Police Matt Basgall has announced his retirement, effective August 2, 2019.  Chief Basgall was hired by the department in December 1990 and was appointed Chief in January 2014. The Clovis Police Department employs 200 employees and has an annual budget of 38 million dollars.

Chief Basgall announced his retirement to his staff yesterday.  He stated, “It has been an honor and privilege to serve the citizens of the City of Clovis.  The Police Department staff does amazing work every day, and I leave knowing the department will remain in great hands”.

Chief Basgall grew up in Clovis and attended Clovis schools, and graduated from Clovis High. Joining the department in 1990, he was promoted to Corporal in 2002, Sergeant in 2006, Lieutenant in 2008, Captain in 2010, and finally Chief in 2014. Chief Basgall has served in nearly every leadership role in the department during his near 3 decade career.

Chief Basgall is a graduate of CSU Stanislaus where he earned his Bachelor of Arts degree in criminal justice. In 2014, after 18 months of studies, he graduated from POST Command College with enhanced skills for managing the future, preparing for emerging issues in the industry, anticipating future trends, and forward/strategic thinking.

After 29 years serving the City of Clovis, Chief Basgall stated that he is looking forward to traveling and spending more time with his family.

Mayor Drew Bessinger said “I would like to congratulate Chief Matt Basgall on his amazing career at the Clovis Police Department.  Matt was a fresh-faced rookie on my first graveyard shift as a new Corporal.  I watched with pride as Matt grew to become both a great cop and a great leader in our community.  I hope you enjoy a well-deserved retirement.”

Assistant City Manager John Holt thanked Chief Basgall for his service to the City and said: “Chief Basgall has served our Clovis community well for 29 years, including his last 5 plus years as our Chief. He is a public safety leader who possesses an incredible blend of skill, knowledge, experience and leadership mixed with humility. Chief Basgall raised the bar on the relationships our officers have developed with our community, a big reason why Clovis remains the Safest City in the Valley. The department is well-positioned for the future, thanks to his influence.”